Why V-Strom is Best Adventure Motorcycle "for those who love it".

Joined Sep 13, 2008
·
24 Posts
There is a lot you can do with a Vstrom both on and off road. Personally I would not consider it for much of off-road if you are going to be in deep sand, whoop-de-do, or heaven forbid deep sandy whoops. Will it do them? Yeah but you sure won’t be enjoying life.

Some guy entered a Strom in the 2016 Mexican 1000. You can see him twice in the NORRA video advertising for the 2017 event. Looked good off the start and then there’s a shot of him on a not to rocky uphill being pushed by three spectators and then dumping it. I think he gave up at the end of day two.

Last year a team ran a Sportster and actually finished. Great bunch of guys and they helped me on day two when my nav column broke off in the middle of nowhere. (KTM) But talk about crashing and just dumping it a whole lot. Tough as hell to have to pick that monster up. Once again, it can be done but not my idea of fun.
I realize the M1K is a race/rally but the terrain is akin to what you would find in many areas you might go adventure riding.
► Show Full Signature
Those who can make you believe absurdities can make you commit atrocities.

Joined Oct 14, 2018
·
440 Posts
I rolled over 10,000 miles on my D'elle 650 in 17 months of ownership and I just got to the wearbars on the OEM Battlax rear tire. I couldn't be happier with this motorcycle. If I'd won some contest where the grand prize was a trip to Hamamatsu to design my own motorcycle, this would have bee the result. I came from a Kawasaki ZX11, and the Versys, and Indian Scout were also on my shortlist. Emotionally, I wanted a V-Twin, so after having ridden and maintained Kawis for over 35 years, I narrowed it down to the Scout and the V-strom. My son had an 800cc Marauder for a first bike, and I got to know Suzuki's approach to design and execution. He went bigger and bought a Harley Dyna Superglide with radial sweeper open pipes. It's a nice bike, otherwise. The Scout nearly got me, but I wanted to ride some of the gravel township and forest roads near me and decided on the 650 V-Strom, as I could ride standing up on it and it made good power. Two things I wish it had come with is a compass, and hydraulic clutch.
► Show Full Signature
"It is amazing what you can accomplish if you are not concerned with who gets the credit"- Patrick Griffin
"What's left after what one isn't is taken away, is what one is.’’ -unknown

Joined Oct 12, 2007
·
4,656 Posts
To the gentlemen who don't think that the V-Strom is the best adventure bike for them. I respect your opinion. Thank you for self identifying. We will not asked for input on the video.
Richlandrick
http://www.adventuretech.biz/

Why V-Strom is Best Adventure Motorcycle..

No caveats in the title...

is it for price
for reliability
for capability
fuel mileage....

Put a "for you: on it and it resolves the challenge - then you get people stating why they chose the Vstrom .

There would be a lot of people jumping on

Why BMW GS series are the Best Adventure Motorcycles..

Why KLR650 is the Best Adventure Motorcycles.

go to gym more, be a man, stop whining it's too heavy, too tall, too ugly,
just ride damn thing LOL

Your right. That title is very misleading. For people that respond without reading the thread t is a natural trap. It was just all that fit.

I would have loved the title "Why is the V-Strom the Best Adventure Bike for You."

But it just doesn't fit. I assumed most people would read the first post and not just the title. My error. Sorry for any embarrassment.
Richlandrick
http://www.adventuretech.biz/

Joined Sep 26, 2018
·
131 Posts
My video would have to include a comparison to my old Volvo wagon, the Swiss Army Knife of cars! I think with the Volvo, my 650 Strom, and the old Honda CT-90, I'd have most travel tasks covered in style. Oh,and a truck of course. And a bicycle. And...

Seriously, I've been allowed to demo ride several really nice bikes and I'm always glad to be riding the V-Strom home at the end of the day. Best, DD

She was a very pretty blue. She had an awesome set of headlights, when it was chilly outside her high beams would "pop" on. She was narrow in the waist and top heavy at the same time. When I mounted her she squatted down just enough so I could get my feet on the ground. She warmed up quick and was always ready for go dancing. I could continue......
► Show Full Signature
"If its not broke yet, it can still be fixed"
N

Was the VStrom the best adv bike for the type of riding I do (little dirt) and my budget? yes

I think it really depends on what your version of adv riding is. A lot of guys call what I'd refer to as duel sport riding adv riding. IMO the VStrom is far from the best bike for the dirt or that type of adv riding. For a tourer on a budget doing the occasional dirt road or dirt into campgrounds the VStrom is hard to beat for the price.

IMO a lot of people should pass on the expensive adv bikes and buy 2 cheaper bikes. One that's great for the type of street riding they do and one that's great for the dirt. All the adv bikes are one big compromise. Unless you're actually traveling and need to carry that street and dirt capability with you I'd argue you would be better off buying 2 cheaper dedicated bikes.

Canada Trip in August. 4100 miles over a couple weeks. Total maintenance, I had to change the oil and adjust the chain when I got home. 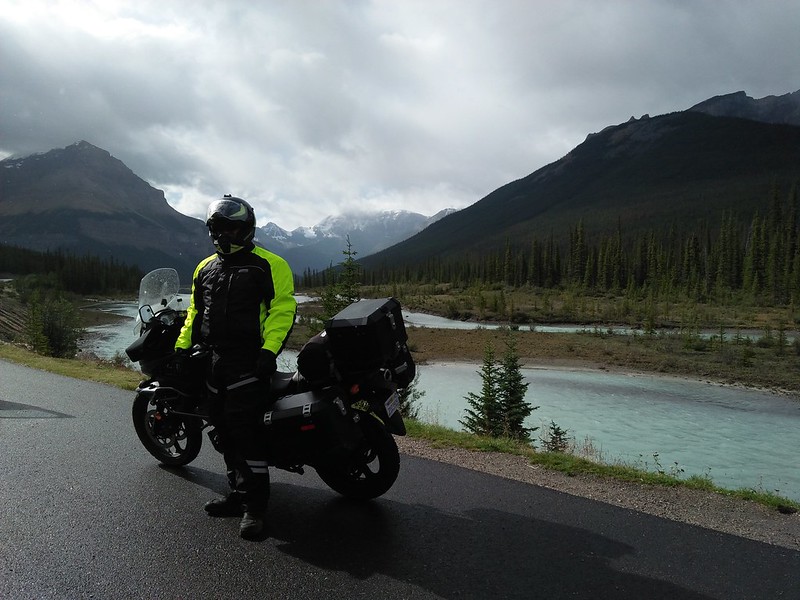 NCK said:
I had to change the oil and adjust the chain when I got home.
Click to expand...

No, it's not a rally bike, no, it's not a trail bike, and it's not a full on sport bike. It's the bike for the way we ride. (And by we I mean those who love it.)
Richlandrick
http://www.adventuretech.biz/

richlandrick said:
A clear theme emerging. Actually what we all know an accept I guess.

Joined Oct 12, 2007
·
4,656 Posts
Agreed. It is easily tailored to the individuals. Not a lot of bikes lend themselves so easily to being tailored to the rider's personal size/shape/inseam, height, etc. It's one of the reason why so many people find it so comfortable.
Richlandrick
http://www.adventuretech.biz/

STCorndog said:
What I liked best about my Vstrom.....

She was a very pretty blue. She had an awesome set of headlights, when it was chilly outside her high beams would "pop" on. She was narrow in the waist and top heavy at the same time. When I mounted her she squatted down just enough so I could get my feet on the ground. She warmed up quick and was always ready for go dancing. I could continue......
Click to expand...

"I don't want a pickle - just wanna ride my motor-sickle"

That only leaves 1% for anything bad. Stock Windscreen

"I don't want a pickle - just wanna ride my motor-sickle"

offnote said:
some forget obviously here - it's not the bike, it's the rider...

go to gym more, be a man, stop whining it's too heavy, too tall, too ugly,
just ride damn thing LOL

Zook Motors is making PWC's now?? :grin2:
► Show Full Signature
"It is amazing what you can accomplish if you are not concerned with who gets the credit"- Patrick Griffin
"What's left after what one isn't is taken away, is what one is.’’ -unknown

I'll try to get some video at the Barber Vintage festival. There should be a few V-Strom owners there.

And about the humorous part. Macdoc, offnote's, et. al., examples of what a V-Strom is NOT, top heavy and all, and certainly that picture of one standing in the water, would be funny as heck/slash provide the points of what a V-Strom is not. I love it.
Richlandrick
http://www.adventuretech.biz/

Joined 11 months ago
·
70 Posts
She's always there in the garage waiting for me to climb on top of her and do with her what I will. She loves it! And I can never give her enough!! I can sense her longing when my finger moves closer to her g-spot (aka starter button). Sometimes I hover a while to increase the anticipation.....but can never dally too long, as I have the need as well. Within a minute, we're joined at the hip and have left the mundane world well behind us as we traverse the stratosphere.... Once done, and we separate, she stares at my back moving away from her with sad longing for more.....but trusts....that that won't.....be long....
41 - 60 of 68 Posts
Join the discussion
Continue with Facebook
Continue with Google
or sign up with email
Recommended Reading
Read More
Read More
About this Discussion
67 Replies
27 Participants
Last post:
Webfors 4 months ago
StromTrooper
A forum community dedicated to all Suzuki Strom owners and enthusiasts. Come join the discussion about performance, modifications, troubleshooting, purchasing, reviews, accessories, maintenance, and more!
Full Forum Listing
Explore Our Forums
General V-Strom Discussion DL650 and DL650A - 2004 to 2011 Off Topic and Member Therapy DL1000 from 2002-2012 DL650A - 2012-2016
Popular Communities