The windscreen and buffeting thread for the 2017+ DL650, the only one!

Joined Apr 14, 2019
·
1 Posts
Thank you, Jhat, for the great idea. I made some side deflectors out of a plastic wastebasket a few days ago. I've only had one ride with them, but I think they have really made a difference.

I'm about 6' 1", have the givi airflow, and recently added the adventuretech mirror extenders (which have also helped with the buffeting and noise). Previously, I was experiencing loud wind noise and head buffeting. Also, was seeming to always be getting blasted in the torso, arms, and up into the helmet with strong, choppy wind. It was also getting inside my jacket at the waistline. Granted, I've only taken one ride with the side deflectors, and the temp was like 62 instead of like 50 on my previous rides. But the side deflectors really seemed to help. There was still a "breeze", but noticeably weaker than before. Also, my head wasn't getting tossed around and it was quieter. It was still kind of loud, but the noise is the least of my worries. Maybe I need a different helmet.

I was skeptical that those little side deflectors would help. I am pleasantly surprised. Mine are black plastic, and maybe a little janky-looking, but they don't really stick out visually. I don't think most people would even notice them without taking a good, hard look at the bike. "Motorcycle people" would probably notice them a lot easier, but I'm not really worried about what they look like. Thanks again.
R

Joined May 30, 2019
·
5 Posts
JHat,
Did you keep the rubber washers on the bottom hole of windshield? How thick are they? I have the Givi airflow too and today’s ride was brutal. It did get 40-50% better when I took the peak off my helmet. I need to make some deflectors. Thanks for posting your results. I’ve had two other Wee’s in the past, but maybe the aerodynamics are just a little different on this 17’. I’ve loved my other vstroms, but I’ve got to solve this issue.

Joined Mar 7, 2018
·
105 Posts
I am not running any additional washers beyond the stock ones at this point. The side deflectors, mirror replacements and no peak took care of everything so now my windscreen mounting is stock.
► Show Full Signature
2017 V-Strom 650
2012 DRZ 400
A

Hi,
took my 2017 V-Strom 650 2 days ago from my dealer.
Fantastic bike so far. But there is an issue with the windscreen: as Suzuki announced it it should be possible to flip the windscreen to 3 different angles. But it is not! My dealer didn't know about it (actually did not know that the windscreen should be flippable) knew no solution. With a Second V-Strom at his Shop the windscreen was not adjustable either so that I started to wonder wether I had misread something.
Has anybody had similar issues and a Solution? :wink2:
Click to expand...

Fynlcut said:
I tried raising the screen to the top setting. Wind noise and buffering increased drastically.
The boundary zone hits me right square in the top of the face shield. The wind noise is now thundering claps of buffeting air slamming my helmet.
The provlem Is not as much the physical buffeting, but the sound is unbearable.
Going to try to shim it a little more upright to see if that helps.
Otherwise I will drop it back down until I can get a better solution.
Click to expand...

i put 1/2 in plastic bushings between the mount and windscreen longer bolts , noise and buffeting is gone . the extra space improves airflow behind the windshield
K

Albert Mashburn said:
i put 1/2 in plastic bushings between the mount and windscreen longer bolts , noise and buffeting is gone . the extra space improves airflow behind the windshield
Click to expand...

Joined 1 mo ago
·
3 Posts
I just fiited an MRA X-creen XCTA Touring spoiler to my 2017 650. It’s one I had from another bike so had no template. Bit nervous of doing it but it turned out really well and makes a huge difference to the wind/turbulence.

Joined 5 mo ago
·
10 Posts
This forum has been real helpful. I’ve got a lot of good ideas and want too thank all of you for sharing. I used Wind deflector idea and finished them up today. I found some 1/8 “ plexiglass on Amazon. I attached with 3M auto double sided tape

Joined Feb 20, 2015
·
9 Posts
I collected a new 650XT a few days ago and found the standard screen noisy and uncomfortable. I am 5'9".
The dealer had a Givi Airflow in stock and I fitted it resulting in a calm and quiet ride. I have just come off a '14 650
with an Airflow and had 90k of trouble free and comfortable riding.
S 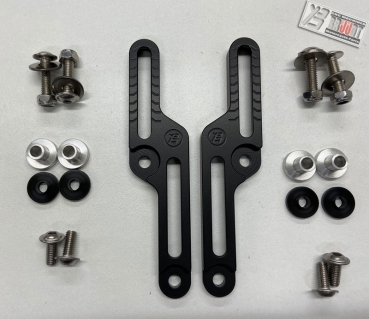 This looks interesting. I know someone asked about this a while back. I dont think the standard windscreen will do the job for me, but maybe a slightly taller one. I also have the MadStad adjustable bracket, but I dont like that it pushes the screeen even further forward than it already is.

Joined 2 mo ago
·
1 Posts
Add me to the list of riders unhappy with the Givi Airflow. Was hopeful but over 50/60mph the buffeting was noticable and not nice. Once I added a pillion to the mix it was all over for that screen.

Ironically, I found a solution on Amazon that I and my Pillion are very happy with. I took both screen out and swapped them back and forth testing the different setting. The $35 Amazon option was the clear winner. Very smooth ride for both of us now.

Joined Oct 4, 2014
·
11 Posts
I have a 2019 650 XT Touring. Just pulled the trigger on the Givi AF 3112 which I bought from Twisted Throttle. I'm about 5' 11" with a 30" inseam and found the stock windshield unacceptable. I didn't get a great deal of buffeting but the noise was terrible even at the highest setting. I have the base of the Givi in the lowest position and can move the screen up just a bit so I'm not looking through the shield, just over the top by about 2 to 3 inches. What a huge improvement. The screen was easy to install and I was very impressed with the high quality of construction and clarity. I also like the Givi designed Suzuki Top Case which I purchased with the bike. Holds two helmets plus gloves, etc and was relatively inexpensive at about $500 for the base plate and case. The Suzuki model doesn't connect to the brake lights which would be very nice.
S

Joined May 29, 2017
·
5 Posts
I ordered the Givi Airflow with my 2019 DL650 due to the positive feedback it initially had. From five bikes and countless windscreens that I have owned I must say the Airflow is the worst. In the low position it gives my helmet a rocking feeling like four-five people are constanly poking their finger at it from different directions. In the top position it vibrates so bad that my vision is blurred. I've tried with both modular and a "sport" helmet. I tried mounting the windscreen at both top and bottom position on the bike with same results. The only way it works somewhat well is if I flip the top part upside down. You get more airflow on shoulders and helmet, but at least its not shaking or vibrating the helmet any more. (I also have Kawasaki mirrors, mirror extenders and just recently switched from Suzuki handguards to Barkbusters)

NOW, I have spent the past few days going between the stock windscreen, my monster sized 24" MadStad screen (with adjustable bracket) and the Givi Airflow. The MadStad gives overall best protection when it is fully up and almost tilted all the way back. My only problem with this screen is actually that I dont get enough air into my helmet. Based on the back swept angle of the MadStad I had a theory that the deflection angle at the top of the Airflow might be the problem as it worked better upside-down. I did some testing and found that if I angle it more backwards the vibration and buffeting goes away! If anyone is going to try this you need to use a different set of screws than the stock ones. The stock screws are too thick to allow any kind of play. You also need a washer between the screw head and the screen. Also be careful not to cross thread the mounts. I first tried with a big nut (M10?) as a spacer and a rubber washer against the bike mount. I then added three washers in addition to the nut and found that to work even better. I have ordered the BRUUDT kit I linked to above and will continue testing when it arrives.

ADV_CrozB said:
Add me to the list of riders unhappy with the Givi Airflow. Was hopeful but over 50/60mph the buffeting was noticable and not nice. Once I added a pillion to the mix it was all over for that screen.

Ironically, I found a solution on Amazon that I and my Pillion are very happy with. I took both screen out and swapped them back and forth testing the different setting. The $35 Amazon option was the clear winner. Very smooth ride for both of us now.
Click to expand...

I ordered this item also - a few weeks ago. Apparently it ships from China, and it is not scheduled to arrive until mid June. Did your order take a long time also? And what year and model is your Strom?
K

Kramer said:
I ordered this item also - a few weeks ago. Apparently it ships from China, and it is not scheduled to arrive until mid June. Did your order take a long time also? And what year and model is your Strom?
Click to expand...

Actually, I need to update. After posting this in the morning, I received the item this afternoon - so delivery time was only 2 1/2 weeks.

I have put it together and installed. Will test tomorrow.
K

Joined 3 mo ago
·
15 Posts
Took it for a test ride and I’m amazed at the difference. Wind noise substantially lessened. I’ve never had any buffeting with the stock screen, just very loud wind noise. I think this spoiler cut it in half, maybe more. At this point I feel like I really don’t need to do anymore wind mitigation.

To recap, I’ve done these items:

Joined Apr 10, 2019
·
544 Posts
Sensei,
Did you accurately measure your Madstad or guesstimate it?
I am just over 6'1" and I get good helmet airflow over ny 22" Madstad.
I used the Madstad instructions and had SWMBO measure it while I sat on the bike. I then installed it using the Madstad angle guide paper and its been perfect.
► Show Full Signature
Phil C.
2017 DL650AL Wee-Strom.
K

George13 said:
Home brew plastic side “spoilers”
Not very clear in the picture.
Click to expand...

Not original to me, and definitely not beautiful, but just attempting to mitigate air from underneath. I’m still undecided on how effective they are...

Joined Mar 7, 2018
·
105 Posts
Your deflectors need to be bigger to have enough of an impact. They are tall enough but they do not turn away from the bike enough to effectively divert the wind out to the side and not straight under your helmet. The nice thing is that these deflectors are easy to make changes.
► Show Full Signature
2017 V-Strom 650
2012 DRZ 400
341 - 360 of 365 Posts
Join the discussion
Continue with Facebook
Continue with Google
or sign up with email
Recommended Reading
Read More
Read More
About this Discussion
364 Replies
117 Participants
Last post:
Baldspot 6 d ago
StromTrooper
A forum community dedicated to all Suzuki Strom owners and enthusiasts. Come join the discussion about performance, modifications, troubleshooting, purchasing, reviews, accessories, maintenance, and more!
Full Forum Listing
Explore Our Forums
General V-Strom Discussion DL650 and DL650A - 2004 to 2011 Off Topic and Member Therapy DL1000 from 2002-2012 DL650A - 2012-2016
Popular Communities